My review of ‘A Horrible Woman’, part of the Scandinavian Film Festival is over at Filmink now.

My review of new Brit flick Eaten by Lions is over at Flickering Myth and below:

Jason Wingard’s movie Eaten by Lions (written with David Isaac) is a sweetly funny movie with much to recommend about it. With its fast pace, likable characters and laugh per minute ratio, it scores highly in the entertainment stakes.

It also has the capacity to be emotionally engaging, which is a credit to the whole cast and writing team who bring the required personality to a story which always seems real and grounded, even in the most bizarre segments. It also keeps any cliched sitcom style elements at bay, and keeps a few surprises up its sleeve throughout the entire running time.

Following half-brothers Omar (Antonio Aakeel) and Pete (Jack Carroll) as they travel from Bradford to the bright lights of Blackpool to find Omar’s birth father, the film keeps their relationship at the forefront. The lead actors give tremendous, heartfelt performances, both amusing and warm. It is their interplay between each other and with the rest of the cast that propels the journey and the film onwards.

Johnny Vegas shows up in a hilarious role as Ray, a local hotel owner who lets the boys stay while they attempt to find out more. Tom Binns also brings plenty of laughs as a spaced out pier-side fortune-teller, who, with a little bit of mystic internet power, manages to let them know the address they need to visit.

When the boys visit Omar’s alleged blood relatives the main story really moves forward. The named father on the mysterious letter they found at their Gran’s is Malik Chaudhry (Nitin Ganatra ) but when they go to his house the response is not immediately overwhelmingly friendly. The facts soon become clear and the film continues on its lighthearted and often very funny way.

Matt North’s cinematography brings a vivid view of the seaside town of Blackpool, with a bright and clear look at the place. Music is used sparingly, but when it is it makes the right kind of impact – such as when one of the boys and their love interest goes on an unexpected joyride around the streets in the Choudhrys’s car, with music blaring out at top volume.

An entertaining film that is funny and heartwarming without being cheesy, Eaten by Lions is top fun for many different kinds of audiences.

My review of Jonas Carpignano’s The Ciambra is over at Flickering Myth and below.

In a small Romani community in Calabria, Italy, Pio Amato is desperate to grow up fast. Amidst a backdrop of tensions between the local Italians, recent arrivals from African countries and his fellow Romani, Pio must decide what route to go down in his quest to become an adult.

There is a wonderful moment in The Ciambra, Jonas Carpignano’s haunting depiction of a boy’s struggle with adolescence, where our lead character witnesses a vivid waking dream of a horse walking around the city streets. This vision of freedom beautifully juxtaposes Pio’s ideas of his community’s past with his own more tightly constrained present on the streets of Gioia Tauro, Calabria.

The film follows Pio (Pio Amato) as he tries to figure out how best to prove himself to his family as a responsible provider. This need only intensifies after his older brother and role model Cosimo is arrested by the local Carabinieri. We see Pio smoking, drinking and fooling around in nightclubs and taking on small-time hustles with little direction. His lack of motivation in life and problems with finding any kind of meaning are powerfully displayed and point towards a future that is not yet decided, but one that is, we suspect, potentially full of further sorrow and difficulty.

The film uses non-performers as its cast and the effect is an increase in the natural documentary style of the feature. The scenes featuring Pio and the whole extended Amato family have a tumultuous rhythm and flair that appear largely unscripted, as if the audience has just been admitted to a place at the chaotically boisterous dinner table. 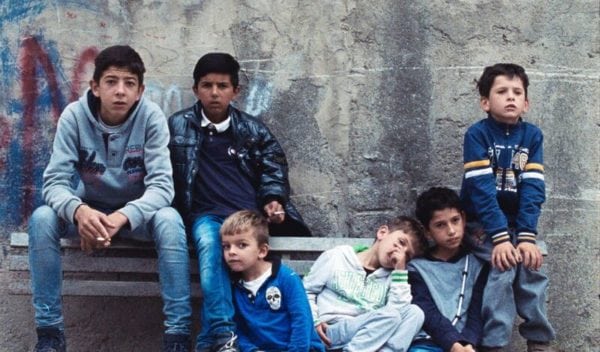 The  film’s writer and director Jonas Carpignano (Mediterranea, 2015) spent years based in Calabria, and his knowledge of the region has certainly paid off for this feature. There is an authenticity about the backdrop and the tense atmosphere of everyday life, as different communities of Italian, Romani and Africans live around each other with an abiding level of mistrust.

The film is specifically about Pio though. And taken purely on this level it is a successful and emotionally rich depiction of a boy growing up. The relationship between Pio and Ayiva (Koudous Seihon), a newcomer to Italy from Burkino Faso, is central to the story, which is less about plot and more about the turbulent emotions behind feelings of family loyalty and identity.

Ayiva is really the boy’s only true friend, and the film’s potent insight into how people from different cultures and backgrounds can understand each other- if only for a brief segment of time- provides some small piece of light in an otherwise bleak, yet compelling, outlook of a life on the fringes. The Ciambra is a difficult film to experience, but an important one, with much to say about desperation, hope and society.

THE CIAMBRA is released in UK cinemas on June 15th

The surgeon had been awake for days. Looking down at the patient’s tattered face, he grimaced. This would need more than a regular skin graft.
He saw a twitch on the patient’s face. A faint mumble, and then a scream.
“Please Lord, do not forsake me!”

Since moving to Sydney, I have started working with the film collective Knowledge Variable.

We are producing art films with a focus on the experimental and strange, the avant-garde and the poetic and the mysterious and the magical.

I’m looking forward to writing, acting in and producing new films and ideas.